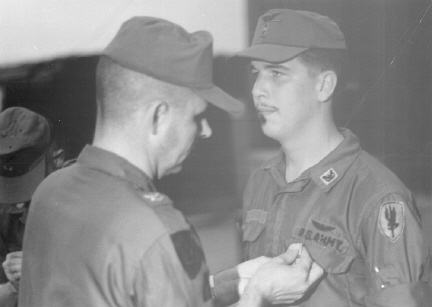 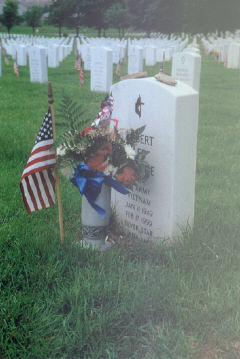 He had landed to save

His buddies in trouble

He kept us from the grave

By bursting the enemies bubble

The thought they had us

We were in their death grip

It was a real circus

Until we saw Bob's ship

We all jumped aboard

To escape the attacks

And we left the horde

Dead in their tracks

Up, up, and away from harm

Bob took his ship and men

If felt so good and warm

Up in the air again

We all made it back

To families and wives

CWO Bob George was born in Johnstown, PA, January 11, 1949.  His parents, William D. and Jean L. George, moved the family to East Stroudsburg, PA when Bob was in elementary school.  Bob's sister, Nancy, rounded out the family of four.  Bob graduated as a National Honor Society student from East Stroudsberg High School, also excelling in varsity sports where he lettered in baseball and basketball.  Bob was voted the most valuable baseball player in his senior year.  He was also a member of the school's rifle team.  Bob graduated from high school with a full academic scholarship to Pennsylvania State University to pursue a curriculum in dentistry.  However, he decided to join the Army and become an Army Aviator and helicopter pilot.  Bob graduated basic training at Ft. Polk, LA and flight school at Ft. Wolters, TX and Ft. Hunter, GA.  Upon completion of flight training he was assigned to the 281st Assault Helicopter Company at Nha Trang, South Vietnam, which supported special operations missions of the 5th Special Forces Group.  Upon his return from the one-year assignment with the 281st AHC he married Lind P. LaBadie on May 4, 1970, before reporting to Ft. Hunter/Ft. Stewart as a helicopter instructor pilot.  The couple set up their first home in nearby Savannah, GA.  Bob trained South Vietnamese pilots to fly gunships.  He was offered a direct Army commission but turned it down.  His wife Linda recently stated that Bob had "already used up his nine lives over there" and by accepting a commission another Vietnam tour would have been likely.

Upon leaving the service Bob and Linda moved back to Pennsylvania where Bob became an engineer with Instrument Specialties, a private company.  Bob was an avid sportsman and enjoyed golf, fishing, and hunting.  He coached a baseball team and loved playing softball.  During his active and busy life he also restored his sports car and he and Linda became fans of NASCAR racing.  The couple's last race together was the inaugural at Las Vegas Motor Speedway.  Bob loved to travel the racing circuit.  He and Linda also loved their Doberman, TAZ.

The following is a personal written message from Linda, Bob's devoted wife, to a member of the 281st AHC Association's Memorial Committee.  "Guess you can tell he was my hero, he was the 'The Wind Beneath My Wings', Beth Midler's song from 'Beaches'.  I never tire of talking about him.  Since his death he has received the medal from the Order of the Silver Rose.  I don't know how much you all know about Bob's Silver Star.  Jim Brown actually put Bob in for the Medal of Honor but because no one was injured they knocked it down to a Silver Star.  Jim used to tell Bob that he should have shot him in the foot so he would have gotten the Medal of Honor which he so richly deserved."

Bob George and Jim Brown remained steadfast friends throughout their lives since first serving together in Vietnam with the 281st AHC.  They both died of cancer within nine days of each other.  May they rest in peace!  Bob was interred at Arlington National Cemetery, Section 68, Grave 2745.  His date of death was 17 February, 1999.

On April 16, 2001, Bob was among twenty-seven deceased Vietnam veterans honored by the Vietnam Veterans Memorial Fund for their Third Annual "In Memory Day Observance" for those who died as a result of their involvement in the war, such as Agent Orange exposure, but not as a direct result of combat wounds. 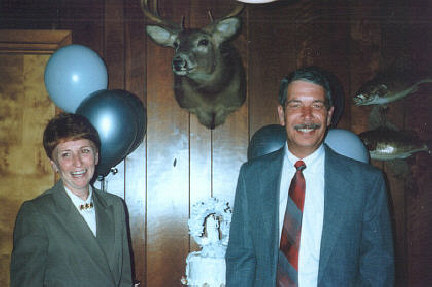 I can't begin to tell you how much I miss you.  I hear your voice, I see you face, everywhere.  You will always be in my heart.  I pray you know that you were my best friend, the love of my life and my "hero".

Not many people in  this life perform acts of selflessness and uncommon valor, you my darling husband have done so, and have touched the lives of many!  You have "made a difference" in this world and rarely, if ever, did you realize the magnitude of you heroics.

I hope you are watching and listening to all those who love you, cause I know how proud all this "fuss" would make you.  You will never be forgotten, not by this generation or the generations to follow.

I am so proud of you, I only wish that I or one of your comrades could have told you what a "difference you made in this world" for all of us!

I will always love you from the depths of my soul!  Until we meet again, I remain....... 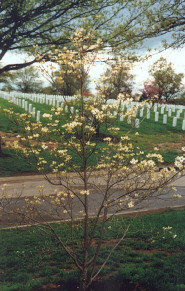 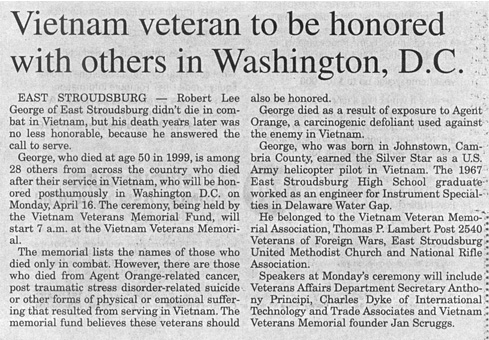 I am writing to thank you for saving my fathers life in Vietnam in 1969 when his helicopter was shot down on Thanksgiving Day!  Bob, I am sure you remember this because the last time I saw you we talked about it and how hard it was to get my Dad into your helicopter.  I would not be here today, twenty years old, and a very happy young woman, if it hadn't been for your heroics.

I have had so many great times with my father.  I could be here for days telling you everything he has done for me.  He was the one who showed me how to hold a bat and was my softball coach for many years.  I distinctly remember on Christmas morning 1997 when my Dad gave me a present to open.  In it was a pair of socks with car keys inside.  The car keys were to my new red Mustang.  I know that he had spent weeks looking for that car just for me.

All of this because of you, Bob.  You are a hero because you saved my Dad's life.  I cannot imagine how frightened you were the day you picked my Dad up with guns firing in all directions.

Thank you with all of my heart.

You don't know me at all, but I hope to explain to you who I am.
I live in California with my husband.  He plans to retire on July 1st.  We have raised six children, matter of fact five sons and one daughter, who we both love very much.  My career was in staying home and raising my family.  I guess we have been real lucky and blessed, not having a bad one in the bunch.
You had an important role in my life, as the way it turned out, you kept me from having a broken heart.  How can one mother thank you enough for what you did for my beloved Son and his family.
Ever since you saved Daryl's life I've had a picture of you in my mind as being so courageous that certain Thanksgiving Day.
I've thought about it every Thanksgiving since then.  You took a judgment from your heart that day to save some men, and how can anyone show their appreciation?
Daryl always loved home, loved his brothers and sister one day, fighting the next, and he really didn't want to go off to an undeclared war.  His oldest brother was just getting home from the Marines in Viet Nam.
It all seemed like a horrible dream to me.  My sons were very good in writing to me and sending me tapes.
I'm just saying that your Mom and Dad ought to be real proud of you.  It seems they did a great job in raising a son like you.
I want to thank you for letting me see my son's Wedding to a great girl, for being there when his son was born, and see Daryl teaching him baseball at nine months old.  Seeing his little girl be born and who is my little tap dancer.
If it wasn't for you I could have missed these important facts in my life.  So in closing Bob, one more happy memory was when Daryl came home and surprised me.  He called from the back door "Anyone home?
I went running down the back stairs and picked him up off the ground.  I'll always be grateful to you for this.
All the best to you in your life, and God Bless you and keep you.  I'm so glad you boys got in contact one again to heal old wounds.

We received your great tribute to our Bob last Friday, and to say the least, we were shocked!  Your letter hit us like a bolt "out of the blue"!  After some tears, after some memories, after some looking at pictures Bob took in Nam, some including you, I feel composed enough to sit down and write what I hope are some coherent thoughts.
First, its obvious that you and our Bob share a very special relationship, a relationship that only a comrade in arms can fully appreciate.  When you feel responsible not only for your own life but for the life of others, that has to be something really, really special.
Bob, I'm glad to hear you've gotten over any guilt feelings you might have had.  Rarely, if ever, does it prove to be worth while to play the "what if" game.  I'm not a fatalist nor do I know what God's plan is for any of us.  What happened, happened, and all of us have to get on with our lives the best we can.
There's not a day goes by that we don't miss him and wonder what he would have been like if he were alive today.
We try to get to Arlington at least once a year to place flowers on his grave.  My wife's parents and sister are also buried in Arlington, so we visit several graves.
Have you gotten to the Viet Nam Memorial yet?  I'm enclosing a picture of Bob's name as it appears on the Memorial.
We, of course, endorse your idea of having a special memorial dedicated at Arlington on Bob's and others behalf.  If you efforts are successful and they result in some kind of ceremony, we'd be honored to attend.
Bob, we'd love to meet you in person and if you ever get to this area, we'd love "to break bread" with you and meet your wife and family. 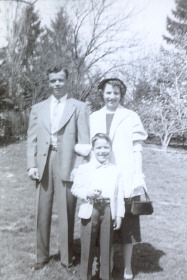